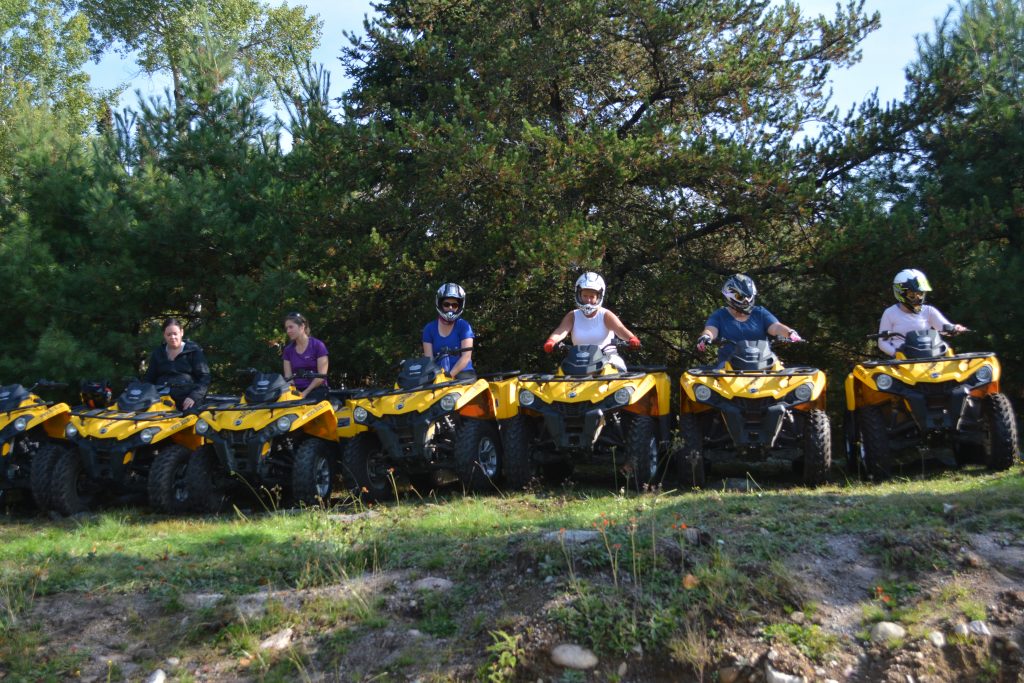 Amanda Trudeau, co-owner/operator of Mukwa Adventures, is happy to say that Tourism Excellence North (TEN) gave her the push she needed to turn an idea into a reality.

The idea had been to do ‘more’ with Sagamok Anishnawbek First Nation – to engage with the land, the people, the culture.  Amanda’s husband, Arthur Trudeau, is a member of the band, and Amanda and Arthur have raised their children within the culture and community of Sagamok.  It was only natural therefore, that their ATV adventure business reflect the land, people and culture as well.

However, in the Spring of 2018, Mukwa Adventures was strictly a touring ATV business with no particular trail system that they were attached to.  As in, Mukwa Adventures would travel to trails all over Ontario where they would meet and tour their clients.  The success of their business – after less than one year as a company – was enough that Amanda was happy with what they had already achieved.  Who wouldn’t be satisfied with such success in such a short period of time?

But that didn’t stop Amanda from jumping into a TEN workshop to explore how Mukwa Adventures could be part of the broader tourism experience for her community and region – Algoma Country.
(Side note – it’s possible that nothing can stop Amanda, ever.)

It was at that TEN workshop, in May of 2018, that Amanda took part in an exercise to map out a new tourism experience for Mukwa Adventures.  She took the broad idea of ‘do more with Sagamok Anishnawbek First Nation’ and narrowed it down to ‘organize and provide ATV tours on Sagamok land’. However, she knew that work needed to be done on the current trails and infrastructure in order to make touring with a group possible.  Within an hour, under the guidance of Laurel Reid, the TEN Specialist facilitating the workshop, a plan took shape.  The plan included mapping out existing trails, cleaning up existing trails, making new trails creating a loop so their ATVs could access particular spots – the mountain, the lake, the remote cabin.  Timelines, pricing and costing were all discussed – and, better yet, recorded on paper.  First on the list, however, was to meet with the Sagamok  Anishnawbek Chief and Council to propose the touring, to ask for permission and so the community could be involved.

After seeing it all on paper, Amanda was excited to realize that what had been an idea could actually become a reality.  Amanda and Arthur have since taken the plan and run with it!  Fast forward to Winter 2019 and Mukwa Adventures, with the blessing of Sagamok Anishnawbek First Nation Chief and Council, is ready to jump into action.  Come Spring 2019, with the help of a grant from the Sudbury Regional Business Centre, the mapping, clearing, and creating of trails on Sagamok Anishnawbek First Nation territory will begin.  Access to these trails will allow Mukwa Adventures to showcase the beauty and culture of the land and to hold their Landbased Cultural Program within Sagamok territory, which will include community-involved programming based out of a new tipi and their remote cabin.  Currently, with tracks on their ATVs, they are running their Winter Land Based Cultural Program on various First Nation territories within Ontario.

TEN is so pleased to have been a catalyst for Mukwa Adventures and looks forward to big things in the future from them!